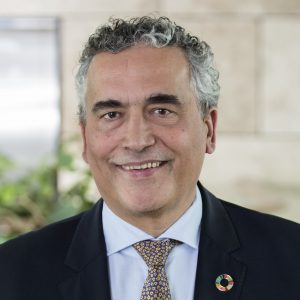 Peter van Mierlo is a former CEO of PriceWaterhouseCoopers (PwC), a world-renowned auditing and tax-consultancy firm. His career at PwC began in 1987 and culminated with a five-year tenure as CEO from 2013-2018. Following his term at PwC, van Mierlo took the role of CEO at FMO, a Dutch bank that is found in world’s developing countries. He held this position from 2018-2020.

Peter van Mierlo studied business economics at Erasmus University in Rotterdam, and as mentioned above, began at PwC in 1987. He worked in their auditing department while simultaneously trained to be a Chartered Accountant. In 1996 he was made Audit Partner before making the move to the Deals team in the role of Transaction Services Partner in 2000. From there, van Mierlo was appointed to the Board of PwC Netherlands Audit Business line, a position he started in 2006. He became chairman of this line in 2009. Following this, in 2013, van Mierlo became chairman of the overall PwC Netherlands Management Board and as a result took a seat on the PwC Europe Management Board as well as the PwC International Strategy Council.

Throughout his career, van Mierlo has always tried to align with sound principles. He has been a long-time advocate of equality in the workplace, across both gender and cultural divides. During his time as CEO of PwC, he decided to appoint the first woman onto the management board. In 2015 he also made sure that three of the seven newly appointed Supervisory Board members were female members. He understood that it was not only at the top level of business that work was needed, but through an organization’s entire structure. “You have to keep alert all the time in order to decrease inequality.”

Peter van Mierlo is a believer in open and honest communication in order to have truly meaningful conversations. It is also his core belief that one needs different capabilities in the team as well as an open mind and inclusivity to be able to create real impact.

The strength of Diversity

Van Mierlo has always called for increased transparency when it comes to the levels of diversity within an organization with the objective of creating true diversity. As we all know a diverse team brings with it a number of different viewpoints and experiences that can all be drawn upon to create a stronger, and better final product or service.
He is a vocal support of companies having diversity driven KPIs to help remove the stigma and increase business transparency. “I think in the Netherlands, if 30-40% of students currently have parents or grandparents that were not born in the Netherlands, and it is true, that we do not see the same percentages in a lot of organizations.”

One of the challenges that is common in many organizations is the ability to look through different lenses to a specific topic. It is interesting to note that regulators, employees, shareholders, clients or other stakeholders would not always reach the same conclusion if asked about a certain topic. To weigh these different interests and to be able to explain why you came to the decision you took is one of the most challenging parts of leading any organization.

If asked about his career, and the moments or decisions that shaped it, van Mierlo often speaks about his intuition. He does what he feels is right and what he feels is important. Taking on a role or investing in a project that will have relevance to the world around us. He believes in placing consideration for the future ahead of immediate gains and seeing the good that can be achieved.
Long-term is so much more important in creating true value.

The importance of WHY

A common phrase in business is to know your why. Knowing your why is crucial for businesses and companies on every scale. It is a concept often talked about and Peter van Mierlo likes the concept. He places the importance on knowing a business’s why, on understanding what their purpose is. To van Mierlo, this single question says a lot about a company’s vision. To him, the why needs to explain a company’s contribution to the world at large, and not just be focused on inward growth and profit margins. A purpose partly substantiated by the company’s values can be stronger than any set of rules and guidelines. Being honest to the values of an organization is at the key to its success. This is also seen in the way he prompted a large culture change, redefining the values, strengthening the compliance function, creating a feedback culture and changing the organization structure during his time as CEO at FMO. A transformation which was needed due to change in the banking world and the growth of the organization.